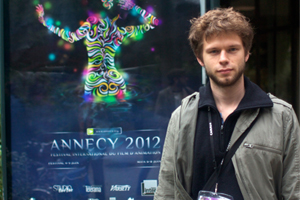 My shortfilm MAISON SONORE was in the official programm of Graduation Films at the Annecy International Animation Film Festival 2012! It’s one of the most important and biggest festivals of animated films in the world, so I had a good reason to be excited.
In addition my film is presented on the sixth edition of the DVD »New German Animations« released by AG Kurzfilm in coorporation with German Films. It’s a preview DVD for festivals, curators and buyers and produced on the occasion of the Annecy festival. Also another animated shortfilm which I was involved in made it on that DVD: “How to Disappear” by Merlin Flügel. I made the sound design for that one.